No matter how much I try, I will never forget this day, 20 years ago. I was 10 and my brother was 8 and my mom came home from the hospital with my grandparents to tell us that my dad had passed away. Yes, I cried but somehow I had an intuition earlier that day that this was going to happen. What broke my heart and still does was my brother’s reaction. How is an 8 year old boy to comprehend that his father was never coming home? And his main worry was whether he had to drive a rickshaw to make money for our family. Of course, now, if he didn’t take my mom’s credit card for petrol, I am sure she would be grateful.

A couple of weeks ago, my mother asked my brother to write something about my dad for something my dad’s side of the family is putting together. And 20 years later, my brother’s response broke my heart again. He said, ” Unfortunately, Ma I don’t know anything about him!” And that hurt my heart so much because I have some vivid memories of my dad that I will always carry with me. Since he was 8 years old, my brother has only been around women- my mom, my grand mom and I. So today, I want to write this blog for my brother to tell him about his father. No, it’s not going to be sad because our Appa was a man full of life, charming, funny and apparently so good with people he could sell ice to an Eskimo. He wouldn’t want us to be sitting around feeling sad when we talk about him.

K, I don’t think you realize this but you are like Appa in so many ways. In fact, V Chitappa always says that when he looks at you, you remind him of his brother. Apart from the fact that you are 6 foot 4 just like him, both of you have bear paw hands!! Appa always found it difficult to eat rasam rice because his hands were too big just like you. When you stand with a glass, Amma swears that Appa used to hold a glass the same way. Just like you have a way with women, he was quite the ladies’ man too! I’m also sure that your love for meat came from him. He was never one to shy away from trying out new food – frog legs, crocodile burgers and what not. You know how you can get away with anything with Amma thanks to your charming personality, Appa was the same way too. He could charm the socks off anyone. Amma always complains about how he could never say no and as a result, after they got married, she was forced to have three dinners at three different places because he couldn’t refuse any of the invitations. He had a booming and contagious laugh just like you and definitely was the life of the party just like you.  Appa was so good at his job that Dr.Reddy was as heartbroken when he passed away as we were. I hope that you will be just as good as yours because we all know that you could sell ice to an Eskimo too.

I have many memories of him and me and how he would take me to the club in Bangalore and I would go around eating food from people’s plates. I guess the foodie in us comes from him. I also remember how one day, when Amma didn’t let me go with him, I yanked on his gold chain and called Amma, “mental, pagal“. Imagine saying that to Amma now.

But, K there are some memories I have of him and you too. Like the time during his office picnic where you were this tubby little kid who lost the lemon and spoon race and wouldn’t stop crying. Appa made sure he cheered you up and got you a prize anyway. Don’t think the organizers were happy but your happiness was paramount. Someone actually managed a picture of that! 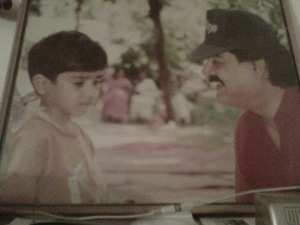 When you were around him, you were fearless. I also think it had to do with the fact that you always wanted to impress him because we all know I was his favourite hahah! While I would be scared to jump into our pool in Africa, you were a happy water baby swimming with Appa.  And I think both of us are good drivers because Appa liked being risky. In Africa, he would let us take turns to sit on his lap and steer our car on the road leading up to our house. And we would feel really proud that we were driving! Your otherfavorite thing to do with him was to go to the lake and watch the hippos cross the street to graze and you would want to ride them while I sat, scared in the car. 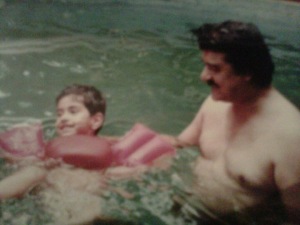 I don’t know if you remember this but he would dedicate sundays to us. First he would take us to Walden to buy books or toys in your case and then take us to the Dollops ice cream place in Begumpet where we would have fruit overload. I can never have that fruit overload ice cream without thinking of him now. And then both of us would wait for his silver Esteem to pull up to our gate and we would run to open the gate for him when he came home from work. We would harass him to take us to the beach not caring that Hyderabad had no beaches. We would also go to his office and sit in his chair and his secretaries would say, “Boss’ children have come” and we would get special snacks. It’s funny how all these memories are only coming back to me now.

8 years will never be enough, K but I promise you there were enough memories from Africa to Hyderabad and I’ll try to think of more stories to tell you. I hope now you can say that you know a little more about him.

When I think of Appa, a Harry Belafonte song always rings in my head because he would sing it to us, ” Down the way, where the nights are gay and the sun shines daily on the mountain top, I took a trip on a sailing ship and when I reached Jamaica, I made a stop.. but I’m sad to say, I’m on my way, won’t be back for many a day, my heart is down, my head is turning around, I had to leave a little girl in Kingston town!”