Anyone who’s known me a while knows that I was a  non vegetarian who loved grilled chicken and chicken 65 and Chipotle burrito bowls. My dad was a hardcore carnivore who experimented a lot with food and my brother is the same but I was more of a conservative meat eater who preferred to stick to chicken most of the time.

Exactly four years ago, on this day, we brought home a furry little munchkin named Winston who taught me about parenting. This might seem silly to a lot of people but having dogs is like having children. And we come from a family where we would never think of tying our dogs outside. They sleep in our bed, eat home cooked food and are loved to death. Another day,  I will write about my love for my dogs but ever since we got Winston and eventually, Puppy, I had toyed with the idea of turning vegetarian. why? Because every animal I saw I would see the face of my dogs on them. Every animal in every zoo/ aquarium, movie, in the wild all remind me of my dogs.

After I got married, one day at my in laws’ place I woke up to the sounds of a goat bleating non stop. I looked out the window and saw a little goat tied in the balcony of the neighbor’s home. H said they were probably going to sacrifice it for some festival. I kept telling him we should go and untie it. Few hours later, the bleating stopped and all that was left was a rope. The tears wouldn’t stop. And then I thought to myself, where did I think my mutton biryani came from? And that I think is how most non vegetarians live – in denial of where the meat on their plate comes from. And that’s how I lived most of my life.  I’ve not eaten mutton ever since.

That still left other meat. I always thought chickens were gross so what was the big deal or they’re going to be killed anyway. This was just me justifying stuff to myself. But I watched gory videos of slaughter houses, I watched animals being tortured before they died and that was enough. There might be some who say they eat ethically and humanely raised farm animals that they raise themselves but I just don’t get it because if I raised animals, I wouldn’t have the heart to kill them. Yes survival of the fittest blah blah but I just don’t get it.

I was never a seafood person but when I quit all other meat, I would eat seafood once in a while to suppress the cravings. But the fishy smell puts me off and also Nemo!! so seafood is off the charts too!

Recently, H spotted a huge ant inside the house which is unusual because we don’t have too many bugs around here. He tried to pick it up and leave it outside the door but it was too fast for him. Later that evening, I spotted the same ant inside our bathroom, wiggling and seemingly like it was hurt. For some reason, I picked it up and flushed it down the toilet and regretted it immediately. It upset me so much and it still haunts me which again might sound strange but honestly, every living being now reminds me of my dogs no matter how gross or icky they might be. H might beg to differ on lizards but would still want ME to pick the lizard up and set it free.

All of this led to me experimenting with clean, nutritious, protein packed food with only vegetarian ingredients. One of my successful attempts resulted in Vegan lettuce wraps.

Salt and pepper to taste 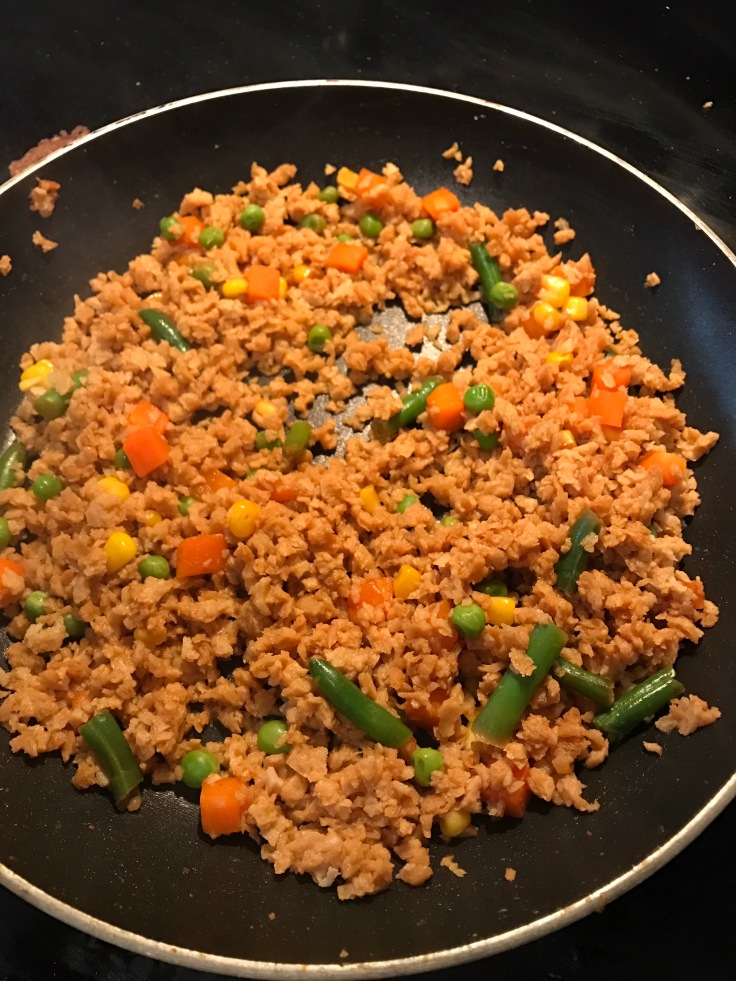 6 thoughts on “How my dogs turned me into a vegetarian!”